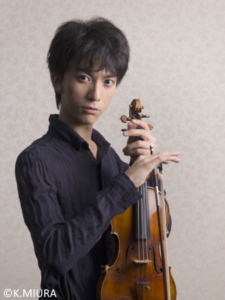 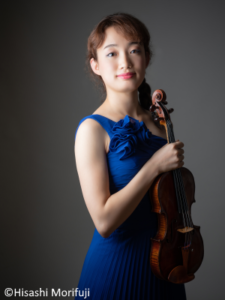 MOHRI Fumika（Violin）
In 2012 Fumika Mohri won the first prize in the Seoul International Music Competition becoming the youngest ever and very first Japanese first-prize winner in the history of the competition. In 2015 she won the second prize in the Premio Paganini International Violin Competition and the sixth prize in the Queen Elisabeth International Music Competition. She also won the 3rd prize in the Montreal International Music Competition in 2019. As a soloist, Fumika Mohri has performed with major orchestras around the world such as the Tokyo Symphony Orchestra, Korean Symphony Orchestra, Munich Chamber Orchestra, Orchestre National de Belgique, Brussels Philharmonic, Orchestre symphonique de Montréal, Kremerata Baltica and Chamber Orchestra of Europe. She has also collaborated with eminent artists including Sir András Schiff, Abdel Rahman El Bacha, Ilya Gringolts, Nobuko Imai, Tabea Zimmermann and Tsuyoshi Tsutsumi. She gave her debut recital at Kioi Hall, Tokyo in 2016.
She has studied with Kaori Tajiri, Sachika Mizuno, and Koichiro Harada. In 2014 she completed the Soloist Diploma Course of the Toho Gakuen School of Music. Since 2015 she has been studying with Mihaela Martin at the Kronberg Academy and Hochschule für Musik und Tanz Köln.

TAHARA Ayako（Viola）
Japanese violist Ayako Tahara, won the prize at Tokyo Music Competition and International Romania Music Competition. She performed the recital and the concertos for solist with Yomiuri Nippon Symphony Orchestra, Tokyo Symphony Orchestra and Tokyo Philharmonic Symphony Orchestra and more. As a chamber musician, she has performed with many great artists around the world. Tahara graduated with honors the Toho Gakuen College with Nobuo Okada and Hamao Fujiwara and Ecole Normale de Musique de Paris with Bruno Pasquier. And studying Hochschule für Musik Detmold with Veit Hertenstein.
She appeared in the radio program NHK-FM “ Recital NOVA “ and in the TV program NHK-BS Premium “ Classical Music Club “of public broadcasting NHK of the Japanese top. And has been awarded The Hotel Okura Music Award.

UENO Michiaki（Cello）
Michiaki Ueno’s eloquent performance and charisma spellbind audiences. He has been praised for his unique yet natural musicality and superlative technique. It is unsurprising that Yo-Yo Ma hailed him as a “fabulous cellist.” Born in Paraguay in 1995, Michiaki started his cello studies at the age of five in Japan. In 2001 he moved to Barcelona, Spain where he studied with Iñaki Etxepare. After returning to Japan in 2004, he has studied at the Toho Gakuen College Music Department, Soloist Diploma Course with a full scholarship under the tutelage of Hakuro Mohri. In 2015, he moved to Germany where he studied with Pieter Wispelwey at the Robert Schumann Hochschule Düsseldorf. Since 2021, he is an artist-in-residence at the Queen Elisabeth Music Chapel in Belgium, where he studies with Gary Hoffman and Jeroen Reuling. In 2007 at the age of eleven, he gave his first concerto performance at the prestigious Suntory Hall, playing the Lalo Cello Concerto. This later led to his success in becoming the first ever Japanese winner of the International Tchaikovsky Competition for Young Musicians held in 2009 at the age of thirteen. A year later, he won first prize in the Romanian International Music Competition along with the Romanian Embassy Prize and the Romanian Radio Culture Prize. He won first prize in the International Johannes Brahms Competition in 2014. His most recent award was first prize in the Geneva International Music Competition in 2021 along with three special awards, including the Young Audience Prize.
He has participated in several music festivals and seminars, including the Festival Pablo Casals in Prades, Verbier Festival, International Music Festival Nippon, Takefu International Music Festival, International Musicians Seminar Prussia Cove, and Kronberg Academy. He has received masterclasses from Steven Isserlis, Frans Helmerson, Ivan Monighetti, Miklós Perényi, and Jian Wang among many other great maestros.
As a soloist, he has performed with numerous orchestras such as the Orchestre de la Suisse Romande, Warsaw Philharmonic Orchestra, Lahti Symphony Orchestra, Gyeonggi Philharmonic Orchestra, Yomiuri Nippon Symphony Orchestra, and New Japan Philharmonic among many others. As a chamber musician, he has shared the stage with artists including Jean-Guihen Queryas, Daniel Sepec, Jose Gallardo, Akiko Suwanai, and Tsuyoshi Tsutsumi. Michiaki has received numerous awards such as the “Foundation for Youth Award” (2011), the “Honorable Award” (2015) from the Iwatani Tokiko Foundation, and the “Aoyama Music Prize” (2017) as a promising rising star. He has been generously supported by the Japan Federation of Musicians, Rohm Music Foundation, Ezoe Memorial Recruit Foundation, Dr. Sieghardt Rometsch Stiftung, and Dr. Carl Dörken Stiftung. Michiaki plays a P.A. Testore cello on loan from the Munetsugu Collection.

SHIRAI Kei（Violin）
Japanese violinist Kei Shirai was born in Trinidad and Tobago and began playing the violin at the age of three. As a child he was taught by Tsugio Tokunaga and, while studying at Geidai University of the Arts in Tokyo, by Chikashi Tanaka and Miyoko Yamane-Goldberg. Upon his graduation in 2007, Kei Shirai was awarded a Japanese Government Scholarship to continue his studies at the University of Music and Performing Arts in Vienna with Johannes Meissl. Among his awards at major international competitions are the second prize and the audience prize at the 2009 ARD Competition in Munich.
Kei enjoys a multi-faceted career as a recitalist, concerto soloist and chamber musician. His concert engagements take him frequently to Japan’s biggest venues and festivals. In Europe he performs regularly with the Stefan Zweig Trio and the Ludwig Chamber Players: an acclaimed mixed instrumentation ensemble based in Stuttgart.
Kei Shirai is a concert master of the Kobe City Chamber orchestra, a post he has held since 2013.

HEMMI Yasutaka（Violin）
Yasutaka Hemmi is one of the most dynamic and active violinists for contemporary music in Japan. He has performed in Japan, Belgium, the Netherlands, France, Italy, Germany, Denmark, Norway, Slovenia, Hungary, Australia, the United States, Canada, Mexico, South Africa, South Korea and Hong Kong, and has been invited to various international festivals.
He has worked with major composers such as Toshio Hosokawa, Joji Yuasa, Akira Nishimura, Brian Ferneyhough, Helmut Lachenmann, Ivan Fedele, Jörg Widmann, Michael Jarrell and given literally dozens of world and Japanese premieres of new works. He has invented new techniques for the violin and has collaborated with many composers, dancers, visual artists, and actors. From 2001 to 2003 he was one of the core members of ChampdAction (Belgium) as a violinist, and made artistic decisions in this ensemble. From 2003 he has been a member of ‘next mushroom promotion’ (Osaka). He has also performed as a duo called X[iksa] with Japanese harpist Takayo Matsumura for more than 15 years.
Hemmi’s solo CD Violin Encounters was released through Megadisc (Belgium) in 2004. It includes the Berio Sequenza VIII, Brian Ferneyhough’s Intermidio and most important, the world premiere recording of Ferneyhough’s Unsichchtbare Farben.
His performances are also available on several other CDs and DVDs. In January 2012 he gave a recital of the complete Freeman Etudes by John Cage, organized by JSCM, which had not been performed by a Japanese violinist before.
His lectures on techniques of contemporary music, for example at Stanford University in 2007, have stimulates composers to write new works.

HOKAMURA Risa（Violin）
Risa Hokamura began the violin at the age of three, and at the age of ten she began to capture top prizes in competitions in Japan. She first came to international attention upon winning the Silver Medal at the 2018 International Violin Competition of Indianapolis, where she performed the Tchaikovsky Concerto with the Indianapolis Symphony conducted by Leonard Slatkin. In celebration of her medal, she returned to Indianapolis to perform a special “Gold, Silver and Bronze Medalists Debut” concert.
Ms. Hokamura won First Prize in the 2018 Young Concert Artists International Auditions at the age of seventeen. She follows in the distinguished footsteps of her two major violin teachers, who also began their careers with Young Concert Artists: Koichiro Harada (founding first violinist of the Tokyo String Quartet) and Mayuko Kamio.
A native of Japan, Risa Hokamura is currently studying at the Artist Diploma program of the Tokyo College of Music as the Honorary Scholarship student under the tutelage of Koichiro Harada, Mayuko Kamio and Machie Oguri. She will be studying from September this year at the Manhattan School of Music as the Full Scholarship student under the tutelage of Koichiro Harada and Lucie Robert. She is also a recipient of the scholarships from the Ezoe Memorial Foundation and the Rohm Music Foundation. 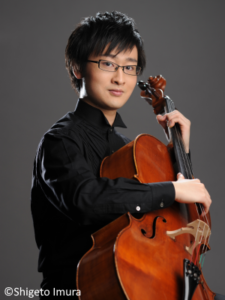 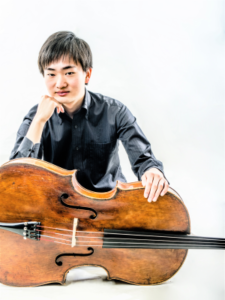 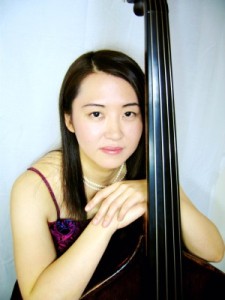 She graduated from Doshisha Women’s College of Liberal Arts the Department of Japanese Language and Literature, Osaka University of Arts the Playing Department.
She performs in various fields such as orchestra, chamber music and brass band.
She studied contrabass under Shuji Ikeuchi, Kazuo Okuda and Koji Miyake.
She is a performance personnel of Soai University, and a member of Ensemble “La Famille” and Brass Paradise Osaka.